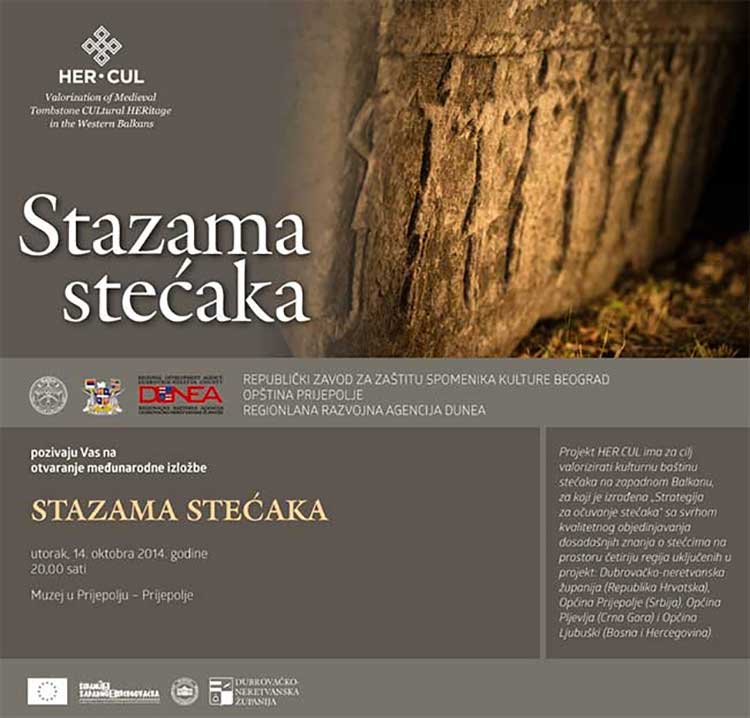 The HER.CUL Project – „Valorization of Mediaeval Tombstone Cultural Heritage in the Western Balkans“ (http://www.hercul-project.eu) was completed in November, 2014. The Project is implemented by the Regional Development Agency of Dubrovnik-Neretva County – DUNEA d.o.o. in cooperation with the partners in Bosnia and Herzegovina, Montenegro and Serbia.

In Prijepolje the first activity in the third year of the Project implementation was the presentation of „Strategy for Preservation of StećciTombstones in the Four Regions Included in the Project“held on June 3, 2014. on the premises of the Museum. The presentation was attended by the representatives of the Museum, tourist organization, Municipal Board of Culture, local community, non-government sector, the Youth Office, companies, and the event was covered by media. All those who attended the event were presented with the publication„Grčkogroblje“ published by the RIPCM andDigitalMind, and a number of the published copies were given to the Museum, tourist organization and the local community for informative and promotional purposes. The gathering was opened by Ms.Maja Đorđević, Republic Institute for the Protection of Cultural Monuments of Serbia - Belgrade (RIPCM) – the representative of the Project partners and Mr.SlavoljubPušica, Director of the Museum in Prijepolje. The results to-date of the HER.CUL Project werepresented by the project coordinator Ms.MarijaRadovanović, of the Development Regional Agency DUNEA, the works on theGrčkogroblje in the village ofHrtain 2013.we represented by Ms.M. Đorđević, and „The Strategy for Preservation of Stećci Tombstones in the Four Regions Included in the Project“ was presented by Mr. Ivan Alduk, Ministry of Culture of the Republic of Croatia. The presentation was followed by the discussion and almost all those present participated in it.

Within the last Work package no. 4 – Activities of Valorization of Stećci Tombstones, the Exhibition titled „On the Trails of Medieval Tombstones Stećci“was realizedand was exhibited in Dubrovnik, Ljubosko, Prijepolje, Pljevlja and Brisel in the period from September 5 tillNovember 25.The authorof the Exhibitions is Ms.IvonaMihl, and the exhibited photographs of stećci tombstones from a dozen selected locations are the work of the Dubrovnik photograph Mr. ZoranMarinović. The criterion for the selection of the localities and certainstećci tombstones was exclusively of visual artistic character. The Exhibition is provided with six background audio paintings of nature by the author Mr. JoškaĆalete. The Exhibition in the Museum in Prijepolje was openedon October 14, by the Deputy President of the Municipality of Prijepolje, Mr.DobroLazarević.

The region which within the four countries was covered by the Project (Dubrovnik, Ljubuški, PljevljaandPrijepolje) is connected by the Trail of Medieval Tombstones Stećci, a newly established tourist route which includes 32 locations, among which are also three medieval graveyards nominated for the World Heritage List. In Serbia the guideposts will mark Grčko grobljein Hrta, Sveta gora in Velikaj Župa, Bijelopolje in Hisardžik and Gostun.

The promotional material, brochures/guide and video „On the Trails of Medieval Tombstones Stećci“were produced and the authors of which were Mr. MatkoSaltarićand Mr.ToniBanović. The gabled roof fromNovakovgrebalj inČepikućeserved as the model for the souvenir which was fabricated by the Association of Persons with Disabilities „Prijatelj“ (FRIEND) from Metković.

The Conference held in the Small City Hall in Dubrovnik on November 24, 2014, marked the completion of the Project. The participants were welcomed by the Deputy Head of Dubrovnik-Neretva County, Ms. Marija Vučković, the Director of DUNEA, Ms. Melanija Milić, and the activities implemented were spoken about by the project coordinator Ms.Marija Radovanović.

The representatives of the partners and associates in the Project presented the Project results in their relevant regions as well as the topics associated with stećci tombstones and the HER.CUL Project itself. Ms. Maja Đorđevićof the Republic Institute for the Protection of Cultural Monuments of Serbia - Belgrade presented the activities in respect to the Project under the topic „Managing MedievalGraveyards with Medieval Tombstones Stećci –the Challenge for the Local Community, case study: PrijepoljeandBajinaBaštain the Republic of Serbia“, Mr. DragišaSokićof TBof Pljevlja (Montenegro) spoke on the topic „The Future of Medieval Tombstones Stećciin the Region of the Municipality ofPljevlja – the role of TB ofPljevlja“, Ms. IvanaBuhač, the representative of the TBof West Herzegovina County (Bosnia and Herzegovina) spoke on the topic „ Tombstones Stećci in Tourism – the role of the TB of West Herzegovina County through the Project and in the Future“, Mr. VjekoslavVierda, the moderator of the Round tables presented the conclusions and spoke about „The Possibilities of Valorization ofStećciTombstones in the Tourist Promotion of the Regions included in the HER.CUL Project“, Mr.Ivan Alduk, Ministry of Culture of the Republic of Croatia, familiarized those present with „The Procedure of Nomination of Stećci Tombstones for inclusion in the World Heritage List“, and Mr.Domagoj Perkić, of the Dubrovnik Museums, presented „The Guidelines for Further Preservation of Stećci Tombstones in the Dubrovnik-Neretva County“. The common conclusion was that excellent resultshadbeen achieved, mostly associated with the visibility and valorization of stećci tombstones in the local community as well as that it was desirable that the activities initiated under this Project should not be completed but continued in other forms and mutual cooperation. 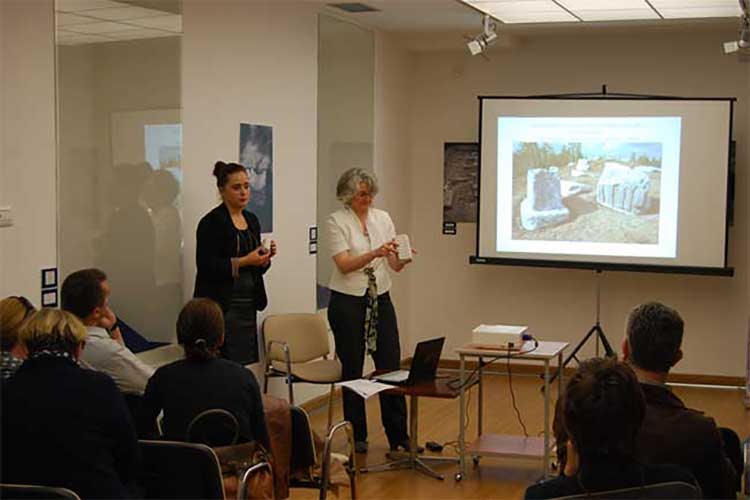 The Museum inPrijepolje, Mr. Dobro Lazarević, DeputyPresident of the Municipality and Mr.SafetPlanić, Tourist Board of Prijepolje, at the opening of the exhibition „On the Trails of Medieval Tombstones Stećci“ 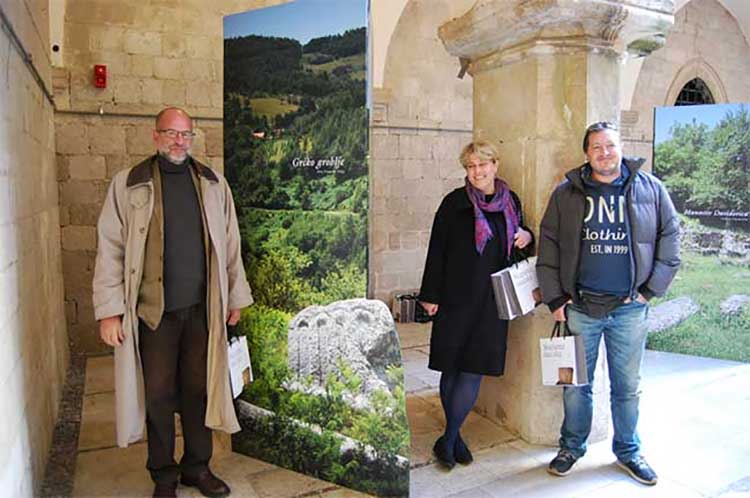 Dubrovnik, The Sponza Place, the author of the exhibition Ms. IvonaMihl next to the mural from the necropolis Grčko groblje in the village of Hrta 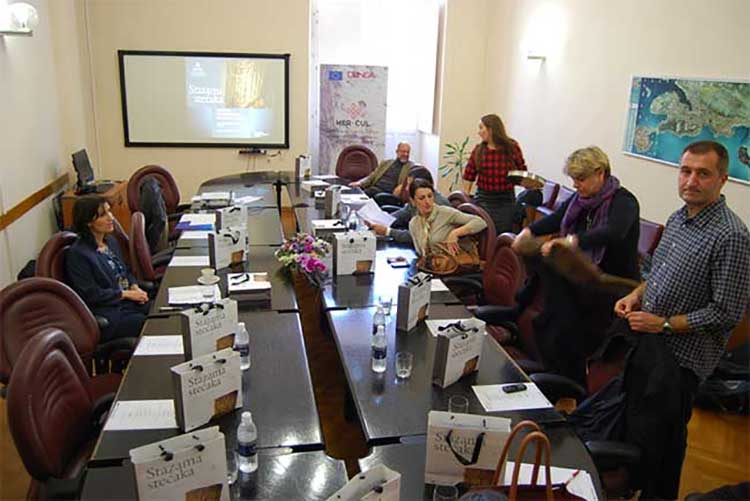 Closing conference of the HER.CUL Project in the Small City Hall in Dubrovnik